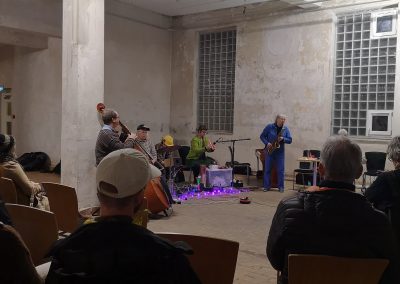 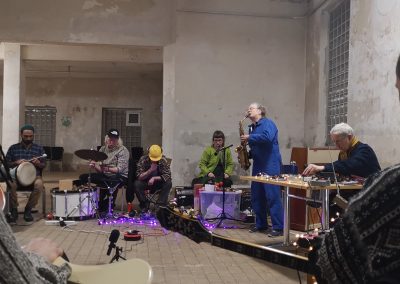 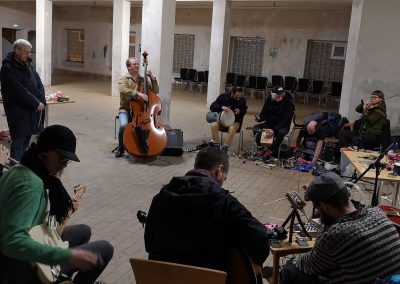 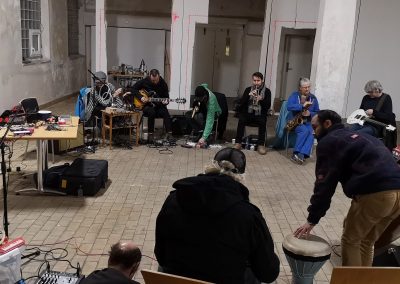 After a visit at one of London Improvisers Orchestras concerts in London in the summer 2019, we invited Steve Beresford and Caroline Kraabel to share some of their wast experience from over 20 years running the LIO. Steve & Caroline joins BIS in one of their children concerts at the library where kids conduct, and they led 11 musicians from BIS thru workshops ending in a concert at Bergen Kjøtt on the 12th of January 2020. Listen to an excerpt here: https://soundcloud.com/bergen-impro-storband/1-free-improvisation-from-concert-with-steve-beresford-caroline-kraabel

Steve Beresford:
Steve Beresford has been a central figure in the British and international spontaneous music scenes for over forty years, freely improvising on the piano, electronics and other things with people like Derek Bailey, Evan Parker, Han Bennink, John Zorn and Alterations (with David Toop, Terry Day and Peter Cusack).

He has written songs, written for large and small ensembles, and scored short films, feature films, TV shows and commercials. He was part of the editorial teams of Musics and Collusion magazines, writes about music in various contexts and was a senior lecturer in music at the University of Westminster. With Blanca Regina, he is part of Unpredictable Series, which produces events and sound and video recordings of experimental music and art.

Beresford has an extensive discography as performer, arranger, free-improviser, composer and producer, and was awarded a Paul Hamlyn award for composers in 2012.

Caroline Kraabel:
London-based saxophonist Caroline Kraabel practises improvisation in music and in life, valuing the way it enhances awareness of time, space, sound and relationships, and gives access to a new sense of agency and possibilities, both for performers and for audiences.

Over more than 20 years as a performer and conductor with the London Improvisers Orchestra she has sought ways to use cues and instruction to free large-group performers to improvise together while making novel listening and playing choices that stretch their capacities and those of the group.